Henry Goldstein wrote an excellent article on pertussis a few years ago.  With some interesting new data coming to press with regard to risk factors for complications of the disease we thought it might be worthwhile doing some spaced repetition.

“My childhood was full of deep sorrow – colic, whooping cough, dread of ghosts, hell, Satan, and a deity in the sky who was angry when I ate too much plum cake” – George Eliot

Although cases have been described as far back as the Middle Ages it wasn’t until 1906 when the organism, Bordetella pertussis, was isolated by Bordet and Gengou. Up to 16 million cases develop worldwide every year with the majority of cases being in the developing world. Australia reported around 10,000 cases in 2009. Data from 2013 suggests it caused at least 61,000 death worldwide though this is likely to be a gross underestimate. Pertussis is one of the leading causes of vaccine preventable deaths worldwide.

B. pertussis is highly infectious with the majority of exposed household contacts becoming infected to various degrees. The incubation period is usually quoted as 4-21 days with the average being 7-10 days.

Before the harsh coughing begins there is often a couple of weeks of symptoms that could easily be mistaken for a viral upper respiratory tract infection. Children may have a runny nose and a very mild tickly cough. This is the catarrhal phase. The classic ‘whoop’ might not be hard until week three or four of the illness.

The classical presentation is of a patient that has paroxysms of coughing that terminates in an audible inspiratory ‘whoop’. Like most classical presentations we learn about in medicine this presentation is rarer than we think. Children may also present with a protracted cough, or forceful post-tussive vomiting. Parents often seek advice as their children have had a couple of courses of antibiotics with no improvement in cough. It’s not know as the ‘one hundred day cough’ for nothing.

People with pertussis (adults and children alike) are infectious from the beginning of the catarrhal stage through to the third week after the onset of the paroxysmal stage of coughing. They cease being infectious five days after a course of antibiotics.

Other than a suspicious clinical picture, formal diagnosis is best made by performing PCR for Bordetella on a nasopharyngeal swab. Once the initial three weeks have past though, it becomes increasing difficult to culture and it may be necessary to use rising IgA titres to make the diagnosis though this does not affect management.

A number of treatments have been posited including vitamin C injections.

Coughs last, on average, 16 days. A Cochrane review found no specific benefit of steroids, bronchodilators or immunoglobulins for the treatment of the cough. Over the counter remedies are unlikely to help and may potentially cause harm.  To hear more listen to this great rant from Dr Anthony Crocco. The only thing that may help (a little) is honey.  Take a listen to Ken Milne’s podcast SGEM #26 – Honey, Honey for more on this subject.

What about antibiotics? Well (in adults) they are recommended in the initial catarrhal phase to help reduce duration of infectivity but they don’t seem to have much effect after the disease has been hanging around for three weeks. Because of this they are not recommended beyond this time period.

If they are needed then macrolides such as erythromycin, azithromycin or clarithromycin are recommended. Azithromycin should be used in children less than one month of age as erythromycin use has been linked to an increased incidence of hypertrophic pyloric stenosis.

Pertussis is far from benign in unvaccinated infants. According to the CDC, in children under 1 that are not fully vaccinated:-

In Winter’s retrospective analysis of US pertussis deaths in infants under 120 days old mortality was linked with:

In those less severely affected it may still cause sub-conjuctival haemorrhages, rib fractures and loss of bladder control.

So who should get antibiotics if exposed to a confirmed case of pertussis? Most guidelines recommend that the following groups of people receive antibiotic prophylaxis.  It’s not really to treat the illness but rather to halt the spread.

To be fully vaccinated the child must have three effective doses of pertussis vaccine given at least four weeks apart.

Whilst childhood immunisation does prevent the majority of cases, individual immunity does appear to decrease with time so there has been an upswing in the number of older children and teenagers affected. Pertussis is a notifiable disease and over 70% of cases that are notified are in patients over the age of 15.

The current Australian immunisation schedule has pertussis vaccine being given as a part of the combined Diptheria, Tetanus, acellular Pertussis (DTaP) vaccine at two, four and six months of age. Other countries may have an alternative schedule. The child then receives a pre-school booster at 4 years old. Because of the waning immunity they should also receive a dose in their teenage years. An individual’s immunity to pertussis may well have disappeared by the time they reach adulthood so new parents, or grandparents living in a house with a newborn should be offered a booster.

Winston, a 4-month-old boy, presents to your emergency department after his mother noticed, during his last feed, that he appeared to stop breathing for around 15 seconds and turned blue.

He restarted breathing spontaneously. Further history reveals a two-day history of feeding difficulties, cough, irritability, and rhinorrhoea. He has also had a low-grade temperature (37.8 0C). There has been no diarrhoea and a few vomits, but only after coughing. He has no rashes. His oral intake has been reduced to about half normal, for the last 24 hours.

Winston was born at term weighing 3700g. Apgars were 91, 95 after an SVD without any risk factors for sepsis. His well neonate check and six week GP reviews were unremarkable. He is exclusively breastfed. He is up to date with his immunizations.

Of note, Winston’s 11-year-old brother has had two weeks of rhinorrhoea and cough but is clinically well.

What is the most concerning feature of this history?

Apnoea – apnea is a particularly concerning feature in infants.

What are your differentials and most likely diagnosis – why?

Whooping cough, caused by Bordetella pertussis, a gram-negative coccobacillus whose only reservoir is humans. It’s transmitted by respiratory secretions, particularly in the first few weeks after exposure.

How is it diagnosed?

Additionally, when considering which children to swab, there was a distinct paucity of evidence. There were several comparisons of PCR vs culture, but no firm criteria about who should score an NPA or flocked swab in the first place.

The US CDC recommends: “Early diagnosis and treatment might limit disease spread. When pertussis is strongly suspected, attempts to identify and provide prophylaxis to close contacts should proceed without waiting for laboratory confirmation. When suspicion of pertussis is low, the investigation can be delayed until there is laboratory confirmation of the diagnosis. However, prophylaxis of infants and their household contacts should not be delayed because pertussis can be severe and life-threatening to young infants.” 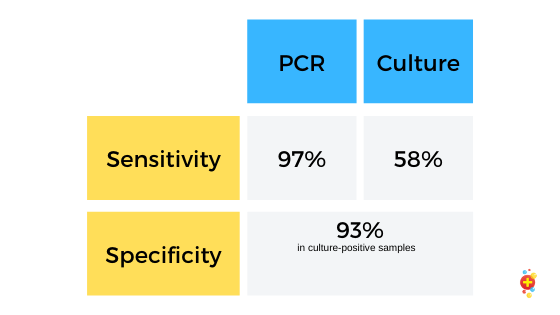 PCR was superior for detection in patients aged 6 months – 3 years and was highly sensitive for the diagnosis of pertussis.

Also of note, pertussis serology may be of use to confirm diagnosis around the time a patient enters the catarrhal phase, but will unlikely change management as discussed above.

Who is at most risk?

Infants under six months have the highest mortality from pertussis; the mortality rate is estimated at around 1%, with 80% of these deaths occurring in infants under 2 months. Comorbid apnoea, pneumonia, and seizures may complicate pertussis infection. Less commonly, a leukocytosis >50,000×109/L or encephalopathy potentially caused by pertussis toxin may occur and is associated with a poor prognosis.

Let’s have a look at the evidence around antibiotic management of whooping cough as well as the indications for prophylaxis. This Cochrane review (assessed as up to date in Jan 2011) is the basis for a number of current guidelines.

The review looks at 13 RCTs regarding the efficacy of antibiotics for treatment & prophylaxis of pertussis. Eleven trials looked at treatment and had the following objectives:

Do antibiotics achieve microbiological eradication of B. pertussis?

Do antibiotics improve the clinical illness of whooping cough?

What is the appropriate dose and duration of therapy?

What are the side effects profile of antibiotics used to treat whooping cough?

Additionally, Honien et al (1999) describe seven cases of infantile hypertrophic pyloric stenosis in a cohort of 200 neonates treated with erythromycin; a significantly increased risk or IHPS in this population.

Do antibiotics achieve microbiological eradication of B. pertussis?

As for treatment, above.

Do antibiotics prevent the clinical illness of whooping cough?

The appropriate dose and duration of therapy?

As for treatment, above.

The side effects profile of antibiotics used for prophylaxis of whooping cough?

Of note, erythromycin estolate is not available in Australia.

The reviewers commented on the marked heterogeneity of studies with regard to the outcome measures and definitions. They note that treatment renders patients noninfectious but does not alter the clinical course. Consequently, they make the following recommendations.

The best regimens for microbiological clearance, with fewer side effects, are:

Seven days of trimethoprim/sulphamethoxazole (20 mg trimethoprim with 100 mg sulphamethoxazole per dose, twice daily, for children under six months of age; double this dose for older children) appears to be effective in eradicating B. pertussis from the nasopharynx and may serve as an alternative antibiotic treatment for patients who can not tolerate a macrolide.

Additionally, in Australia, a pertussis booster vaccine is recommended for close household contacts of newborns; this advice is part of a neonatal discharge check within the hospital.

There is insufficient evidence to determine the benefit of prophylactic treatment of pertussis contacts. Prophylaxis with antibiotics was significantly associated with side effects and did not significantly improve clinical symptoms, whoop, paroxysmal cough, number of cases who develop culture-positive B. pertussis or paroxysmal cough for more than two weeks in contacts older than six months of age. Due to the high risk of morbidity and mortality in infants less than six months of age who are incompletely immunized, contact prophylaxis is recommended for families who have an infant less than six months of age. The recommended antibiotics and dosages for contact prophylaxis are the same as those recommended in the treatment of whooping cough.

Additionally, the American CDC guidelines written in 2006 were reviewed more recently and not rewritten. They were published prior to the 2007 Cochrane Review.