When a medical student starts their paediatric ED rotation they need to know three key illnesses and that will cover the majority of patients that they see. To round out the ABC trifecta of asthma and crapping (acute gastroenteritis) we have bronchiolitis. At #DFTB19 Ed Oakley from PREDICT gave us the latest.

DoodleMedicine sketch by @char_durand-done live from Australia via the DFTB19 streaming video link! 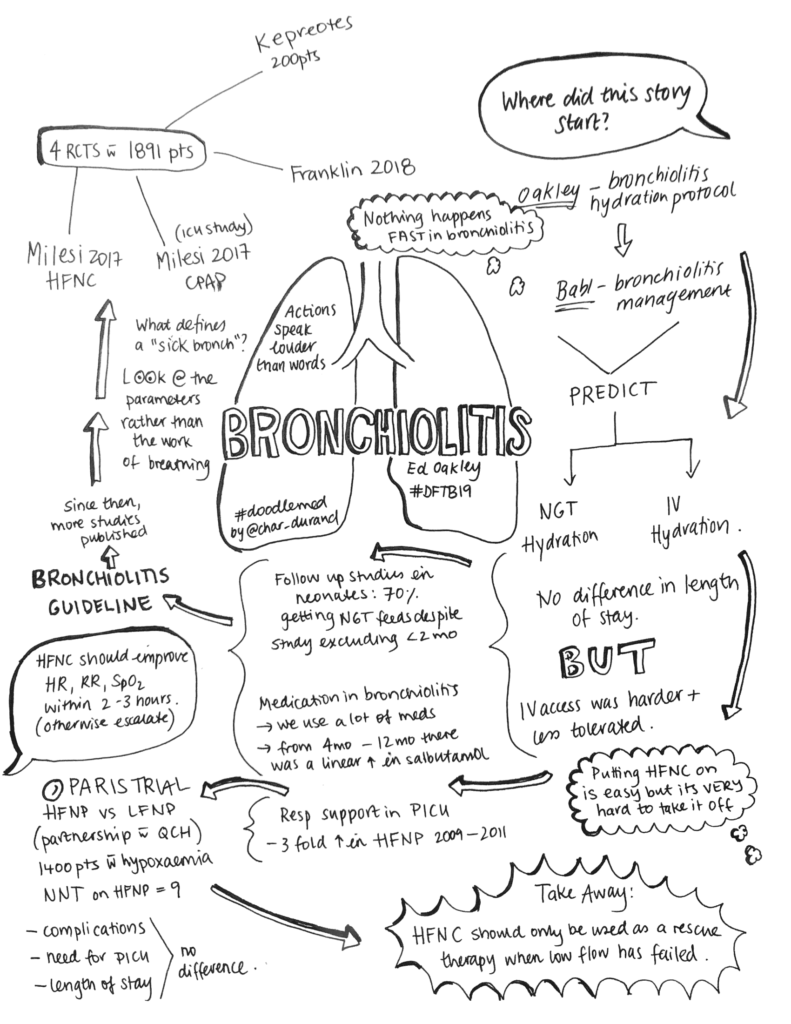 In the three years since we launched the Bubble Wrap segment we have been able to highlight a number of key articles in paediatric research.  In this talk from the popular Bubble Wrap Live! sessions, Susie Piper brought us her top five favourite articles from the general paediatrics realm.

*The astute amongst you might have noticed the inclusion of six trials rather than five. Susie decided to combine the two probiotic trials. 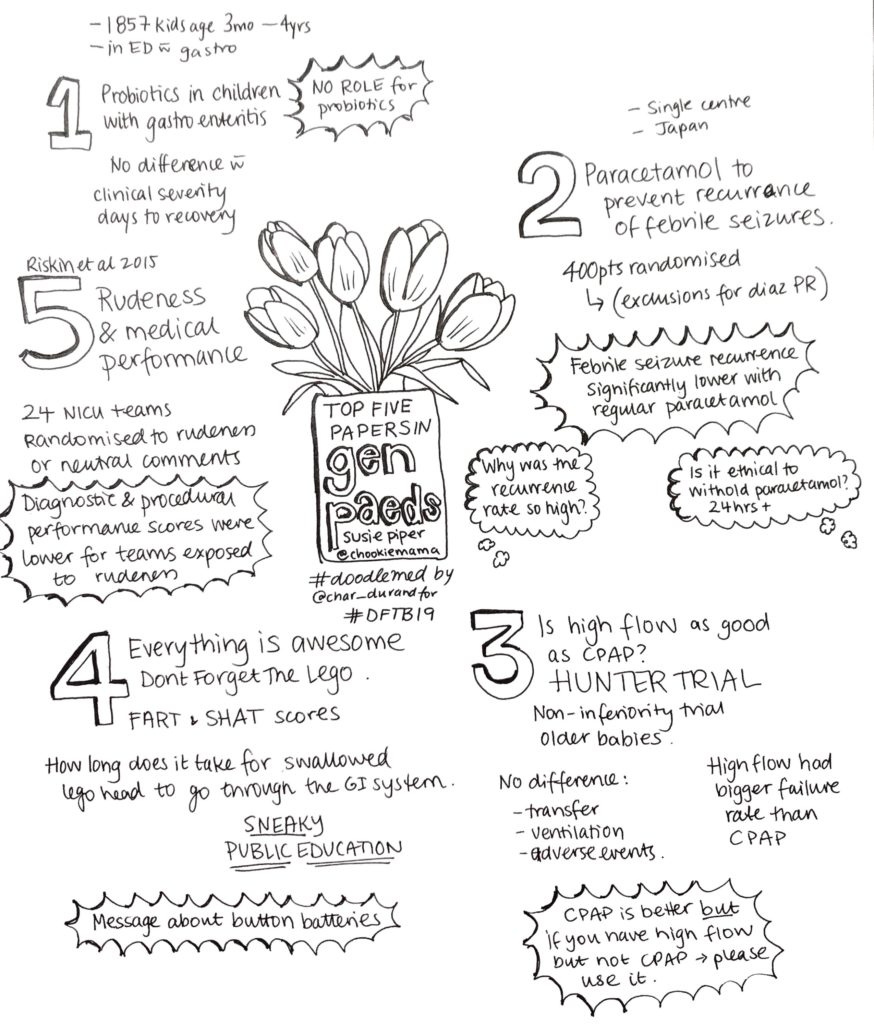 PARIS in the autumn

As the days get shorter for those of us in the Southern hemisphere it inevitably means that bronchiolitis season is on its way. So far studying bronchiolitis has left us with a big list of things that don’t work – steroids, salbutamol, adrenaline, antibiotics. Chest  x-rays don’t help and NPAs don’t give us any information we can actually use – but what about high flow?

Through the PARIS trial, Donna Franklin and our friends at PREDICT have considered nearly 21,000 infants presenting to 17 different hospitals to try and shed some light on this for us.

Who did they look at?

Infants <12 months old with a clinical diagnosis of bronchiolitis and a need for supplemental oxygen to keep their SpO2 in the range 92-98% or 94-98% (target sats range varied by hospital as hospitals had different guidelines at the time of the trial). Of the 20,795 children screened, 1638 were randomized. The bulk of exclusions were for disease too mild to warrant treatment or for having an alternative diagnosis. Other exclusion criteria all have pretty logical reasons (e.g. cyanotic heart disease, craniofacial abnormalities, or the need for home oxygen). After removing those for whom consent could not be obtained 1472 made it through to analysis.

What did they do?

The intervention group were placed on heated humidified high-flow oxygen at 2L/kg/min via an Optiflow system.* Notably this flow rate is double the 1L/kg/min used by Elizabeth Kepreotes and her team in what, prior to PARIS, had been the largest trial of bronchiolitis in high-flow conducted in Australia (1). The PARIS trial adjusted the FiO2 to achieve sats in the target range, followed by weaning down to 0.21 to use the lowest FiO2 possible to achieve those target sats. Kids whose FiO2 had been at 0.21 for 4 hours were taken off high-flow. I’m laboring the details of this process because I think PARIS is setting a standard as I will explain below.

What were they comparing it with?

Infants in the standard therapy group got plain old wall oxygen through standard nasal cannulae up to a maximum flow rate of 2L/min (note this is NOT weight dependent) again weaned so as little oxygen as possible was being used to keep the sats in the target range.

What did they find?

The primary outcome was treatment failure that resulted in the escalation of care during the hospital admission. Treatment failure was defined by the child meeting any 3 out of 4 clinical criteria:

Hospitals with an onsite ICU escalated care in more of the patients on high flow (14% vs 7%) and fewer of the patients on standard flow (20% vs 28%) than hospitals without an on-site ICU. This makes sense given the practical barriers to escalating beyond high-flow in facilities without a PICU onsite. 34% of infants who had their care escalated had it done on the basis of clinician concern, not the pre-defined physiological parameters, and this was more common in the standard therapy group. This, perhaps, reflects the widespread belief that high-flow is helpful in this situation making it harder for people to hold back. Looking only at the infants who triggered the physiological criteria, escalation was still more common in the standard group than the high-flow group (16% vs 7%) supporting the conclusion that high-flow does indeed reduce the objective need for escalation of care.

Historical factors such as prematurity and previous admission with bronchiolitis made no difference to the findings, nor did positive identification of RSV in the patient’s nasopharynx.

Secondary outcomes showed no differences in the duration of hospital stay, duration of ICU stay or duration of oxygen therapy. 12 infants were intubated, giving an intubation rate of just under 1% of the bronchiolitis infants who made the inclusion criteria. Importantly, adverse event rates were both low and equivalent in both groups with one pneumothorax in each group, neither of which needed draining.

This is the biggest and most robust trial yet done to assess the value of high-flow in bronchiolitis. The primary outcome shows that there is a role for high-flow in the non-ICU management of this disease. Importantly PARIS has shown in a large cohort of children that high-flow, when used within the parameters of the trial protocol, does not lead to an increase in adverse events which in-turn suggests the increased patient:nurse ratios for kids on high-flow that are often mandated by hospital policies may not be necessary (depending on the severity of disease of course). Some caution must be used around the potential for erroneous use of the high-flow circuits themselves and the interpretation of early warning scores in the context of high-flow use.

PARIS was supported with significant nursing education resources potentially reducing errors to a level that were below what could be expected with the standard resourcing of mixed EDs and other environments where high-flow use in children may be infrequent. As with many grey areas in medicine protocols as to how we use high-flow vary by institution with little more than opinion to guide them.

Though neither the intention nor the conclusion of this paper in showing the progress of such a large number of children on high-flow, this trial also provides a basis for more robust decision making around how we use high-flow itself.

We will try and encourage some of the authors of this paper to share their insights with us on DFTB, indeed a few will be speaking at DFTB18 in Melbourne in August.  In the meantime we would love to hear what you think in the comments section below and enjoy our infographic summary.

Ben discussed this paper with Ken Milne on the Skeptic’s Guide to Emergency Medicine blog and podcast episode 228, which you can access here.