6 year old Charlotte is carried into  your emergency department by her father. She had been helping him tidy up the garage and she thought she had scratched herself on an old box of toys.  An hour later she was inconsolable and refusing to walk. 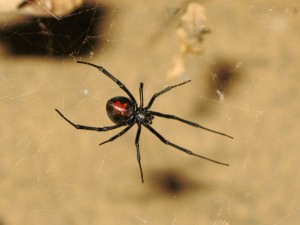 Redbacks (Latrodectus hasselti) can be found throughout Australia with their kissing cousins, the Katipo (Latrodectus katipo) more common in New Zealand.  They thrive in urban environments and are one of the reasons this author refuses to use outdoor toilets.

Their bites are not immediately painful and  can often be mistaken for a scratch but within about 30 minutes there is intense regional pain  accompanied by sweating and piloerection.  Their venom contains alpha-latrotoxin which causes neurotransmitter release at nerve terminals in the sympathetic nervous system. Whilst children are often bitten on the leg the pain can radiate to the leg that has not been chomped on. This triad of intense pain, sweating and piloerection is the classic presentation of lactrodectism.

Systemic envenomation is occurs in about a third of cases and is characterised by both autonomic features (e.g. sweating) and more general features such as nausea, vomiting and headaches.

Be aware though that Redback bites have been known to present in atypical ways and have been confused with appendicitis, intussussception and meningitis so they should be on the differential for any inconsolable child with irritability and diaphoresis.  The autonomic effects have even been known to cause priapism in young boys.

How should they be treated?

If the bite is left untreated symptoms should resolve in three to four days.

Simple first aid measures that can be applied at home include applying an ice pack to the bite and using simple analgesia to help mitigate the pain.  There is no evidence that pressure immobilisation bandages are effective in the treatment of Redback bites.

Once in hospital the child should be given reassured and given appropriate analgesia.  Often they  need  titrated doses of opiates.  They may also be offered antivenom.

If there is an antivenom, shouldn’t we give it?

CSL Redback Spider antivenom is indicated for severe local pain that does not respond to simple analgesics.  The standard dose is 2 vials undiluted IM or 2 vials diluted in 100mls normal saline IV over 30 minutes. Interestingly the RAVE trial found detectable levels of antivenom only in patients given intravenous therapy  compared to via the intramuscular route but with no appreciable clinical difference between the two groups at two hours.  Doubt has now been cast on its utility. When one considers that up to 5% of patients undergo an immediate hypersensivity reaction 16 % of recipients of the antivenom develop serum sickness within two weeks a shared decision needs to be made with the patient/parents as to whether or not to give it. Because of these risks it should be given in a monitored environment.

Redback anti-venom can also be used to treat the bite of a cupboard spider.

How about funnel-web spiders?  Are they more dangerous? 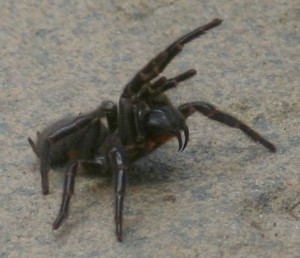 Funnel-web spiders belong to the famous BBS, or Big Black Spider, group of Australian nasties.  They can be found around 120km radius of Sydney.  Their venom, a potent neurotoxin, can be lethal if untreated.  Because of the  speed of onset of venom action the pain is immediate with systemic symptoms occurring just half an hour after envenomation. Effects will be felt within two hours of the bite.

General features of funnel-web envenomation include headache, listlessness and nausea but these rapidly progress to life threatening cardiovascular, respiratory and neurological compromise.  In the late stages of envenomation the child may become bradycardic and hypotensive (or hypertensive due to autonomic overactivity) and develop acute pulmonary oedema.  They may complain of perioral paraesthesia and may have visible muscle fasciculations. These all herald impending doom and potential cardiorespiratory arrest.

How should they be treated?

The spider is big enough to be seen and leave visible fang marks so there is often no doubt as to what has happened. The victim needs to be transported to a centre capable of dealing with such an envenomation as quickly as possible. In cases of funnel-web envenomation proper application of a pressure immobilisation bandage LINK may be life saving.

Once in hospital the ABC’s should be managed in the usual fashion with priority given to the provision of antivenom. Two vials should be given immediately though there are case reports of four vials being given peri-arrest. Funnel-web anti-venom can also be used to treat the bite of the mouse spider.

Any other scary spiders I should know about? 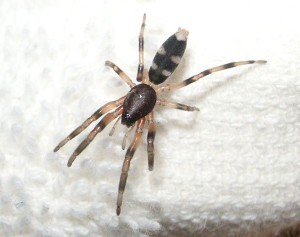 Australia has a lot of scary looking creepy crawlies.  One common reason for visits to the ED is the White Tail.  These spiders can be found throughout Australia. Like most arachnids their bites can be painful for a couple of hours but they very rarely cause systemic envenomation.  Unlike their North American cousins, the Brown Recluse spider, they have not been shown to cause necrotic skin ulcers. Generally they cause local pain and may leave a red mark for a day or two but there is no evidence of skin break down. There is no role for prophylactic antibiotics.

Charlotte is treated initially with intranasal fentanyl and oral adjunctive therapy.  After discussion with her father you elect not to give Redback anti venom on the proviso that they return should the pain be uncontrollable.

Craven, John A. “An Irritable Infant and the Runaway Redback: An Instructive Case.” Case reports in emergency medicine 2011 (2011)