Rhiannon is a 2 year old with spina bifida who had a VP shunt inserted during the first month.  It was revised because of a “blockage” at 18 months.  She has not been herself for the last 24hours; more lethargic than usual- especially this morning when she woke up where she also felt hot.  She vomited in the car on the way to the Emergency Department.  She has had previous urinary tract infections.

Rhiannon was afebrile on presentation in ED.  In triage, she was observed as being awake and drinking from a bottle but wasn’t perturbed by having her observations taken or finger-prick glucose.  Overall she was a little quiet in the ED and her mum was concerned that this was absolutely different from her baseline.  Her urine microscopy was not concerning.  She had a mild neutrophilia and a normal CRP.  Subcutaneous examination of her shunt, from her skull to the right clavicle was normal.  She vomited once in the ED.

This is a common presentation and one that can be challenging to manage. Missing a shunt problem can have catastrophic consequences. This post will take you through some pearls and pitfalls of managing children with VP shunts presenting to the ED.

What is a VP shunt?

A ventriculoperitoneal (VP) shunt is a medical device used to drain fluid via a pressure gradient, away from the brain for conditions of excessive cerebrospinal fluid (CSF).  The intention is to shunt fluid away and avoid excessive pressure on the brain.  It is one of the commonest performed neurosurgical procedures and is the treatment of choice for the vast majority of patients with hydrocephalus. 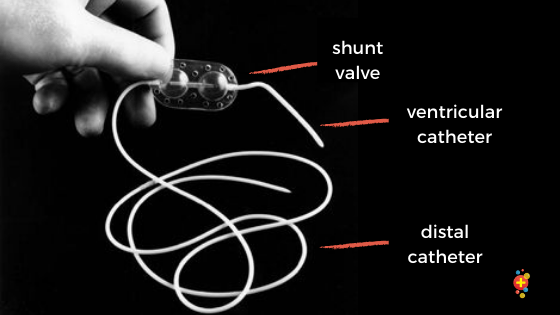 Shunts drain according to the differential pressure gradient between the ventricle and the tip of the distal catheter.  The ventricular end of the catheter is inserted through a burr hole in the right parietooccipital region and the valve often sits behind the right ear.  The distal portion is subcutaneously tunneled down into the abdomen where it’s positioned inside the peritoneal cavity. 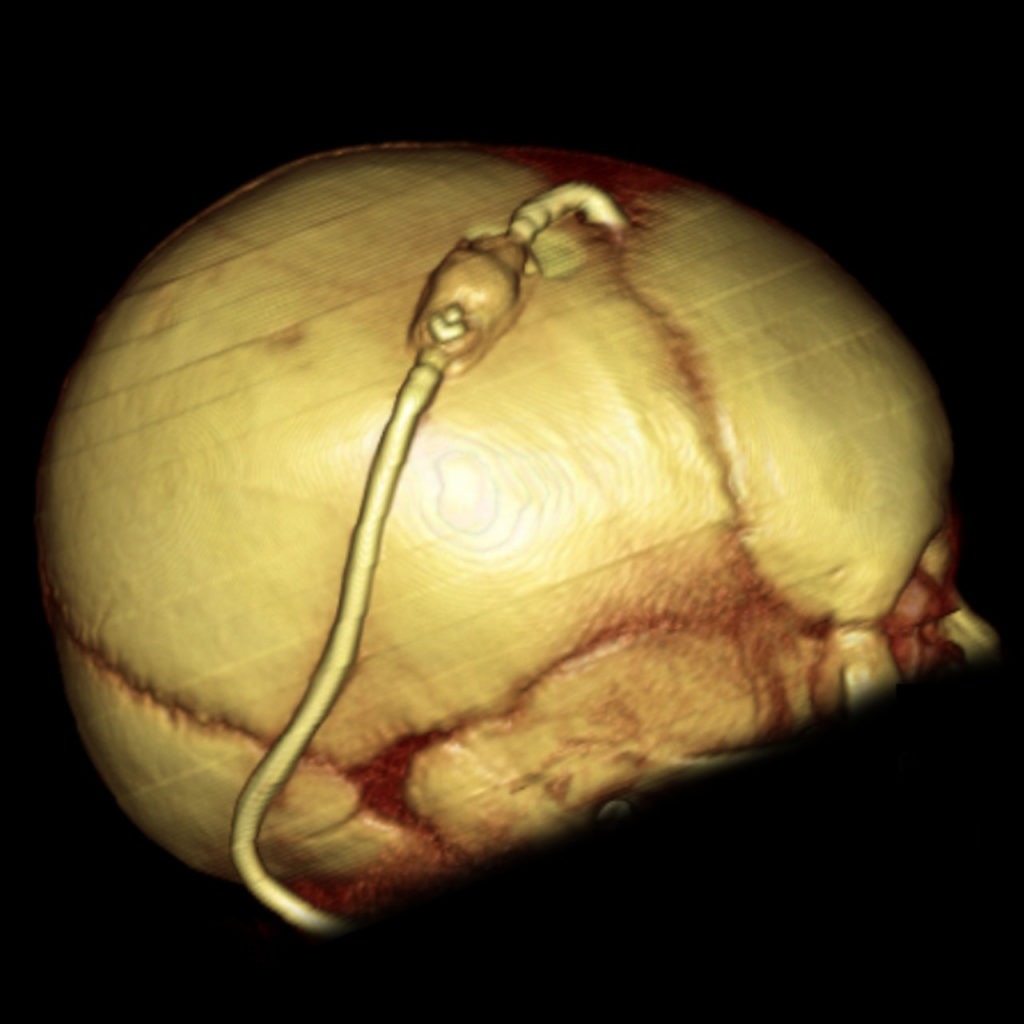 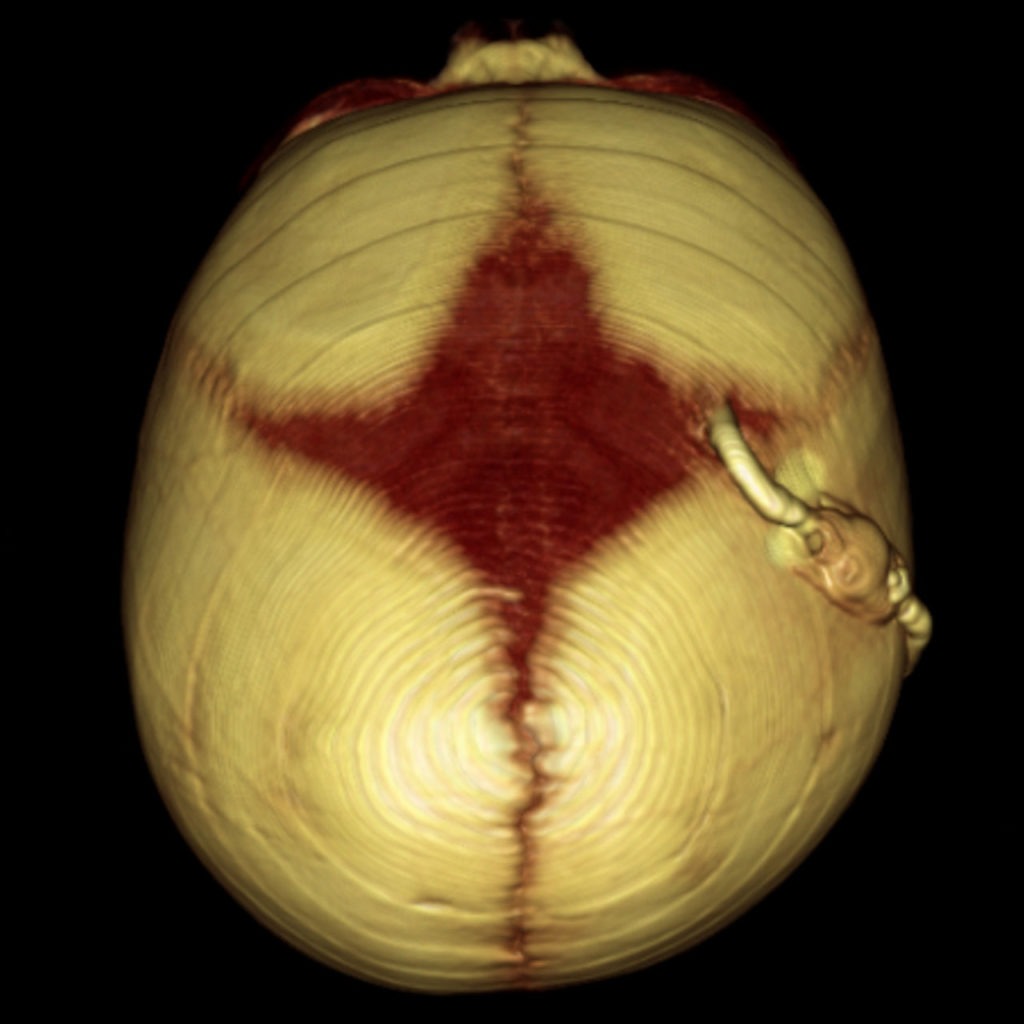 The diagnosis of raised intracranial pressure in children with VP shunts is challenging.  The symptoms are non-specific and the commonest causes often benign.  Rhiannon could easily have a simple viral illness or her symptoms could be associated with rising intracranial pressure. Missing a shunt malfunction in these patients can be catastrophic.

Physiology of CSF circulation and drainage 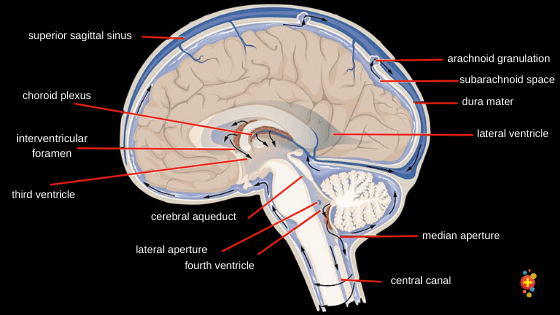 Shunting CSF is an effective way to avoid the neurological damage that ensues if the build-up of CSF is left untreated.

There is a myriad of reasons as to why a VP shunt should be placed.  They can be categorized into congenital or acquired causes. 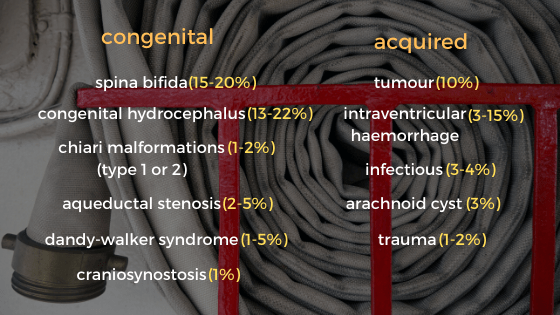 Having a VP shunt in itself is a cause for concern for patients and caregivers.  Common areas for concern in paediatric patients include:

Failure rates are quoted as 30-40% at 1 year and 50% at 2 years in the paediatric cohort. A patient can expect to have 2-3 shunt revisions over the course of 20 years and the median time to shunt failure is just 1 and a half years. Paediatric revisions are more commonplace than adult revisions. 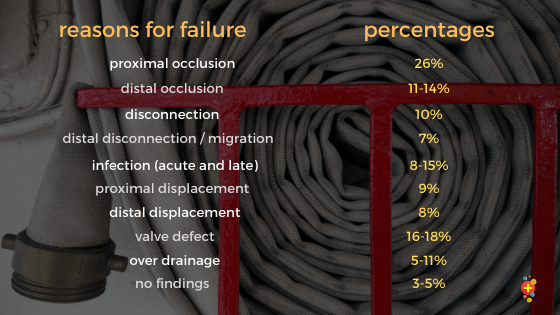 Risk factors for shunt failure include:

The commonest cause of shunt malfunction is proximal occlusion. There’s no clear data on whether programmable or non-programmable shunts are less likely to occlude.

It’s hypothesized that on insertion, the lumen can be obstructed with brain parenchyma from the cerebral cortex before reaching the ventricle, or choroid plexus when inserted near to the foramen of Monroe. It can also be occluded with blood following choroid plexus haemorrhage along with other cellular matter such as macrophages, giant cells, connective tissue, fibrin networks, debris, neoplastic cells.

Distal catheter blockage tends to occur later and when it occurs, it should raise the suspicion for an intra-abdominal pseudocyst or adhesions which may affect future peritoneal catheter placements.

Shunt infection is the second most common reason for malfunction. The data is mixed, particularly as some older papers use data from before the time of antibiotic-impregnated catheters, skewing the data. Risk factors include young age (including neonates), post-op CSF leak, previous shunt infections, and the presence of a gastrostomy tube.

The vast majority of shunt infections are acute.  Far fewer late-onset infections have been reported. They can be attributed, mostly, to peritonitis, abdominal pseudocyst, bowel perforation, and haematogenous inoculation.

Shunt infection is associated with an increased risk of seizure disorder, decreased intellectual performance, and a two-fold increase in long term mortality. Re-infection occurs in one-quarter of children.

The proportion of shunt infections falls off rapidly after the first several months following implantation. The vast majority occur during the first 6 months. Children will present with signs of shunt failure, as well as systemic infection.  Fever is common and if we were to sample CSF (which is not often done in the ED), the presence of >10% neutrophils in the ventricular fluid is highly specific and sensitive of infection.

This is often a late complication and almost always occurs along the distal portion between the valve and peritoneum.  With age, fibrous tissue becomes calcified and does not slide freely within the subcutaneous tissue then the tubing can crack.  This is more likely to happen in the neck where most movement occurs.

Tension can also form along areas of calcification causing tethering and stretching as the child grows.  It is important to note that early shunt fracture can occur and this could be a consequence of trauma to the tubing during surgery.

CSF can still drain resulting in an insidious duration of symptoms, clouding and confusing the diagnostic process.

Shunt series radiographs should always be sought in this cohort, though frequently fractures and disconnections are incidental findings during surveillance exams. 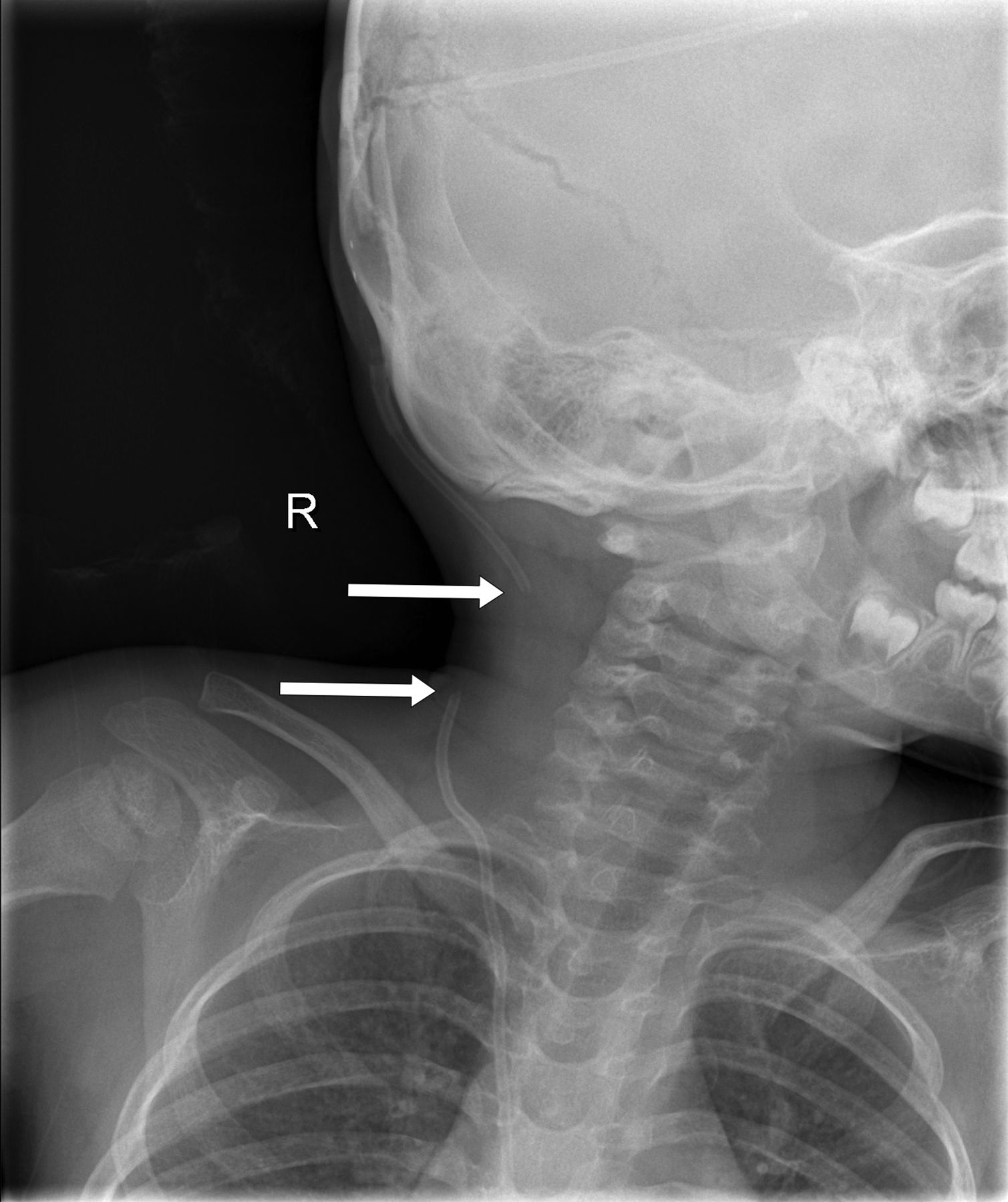 VP shunt fracture. Reused with permission from Education and Practice, Archives of Disease of Childhood

Catheters are generally multi-component and hubbed together so disconnections can occur soon after surgery. The disconnection impedes the flow of CSF and it may still leak.  The onset of these symptoms may be slow.  Disconnections can happen at either the proximal or distal aspect of the valve. 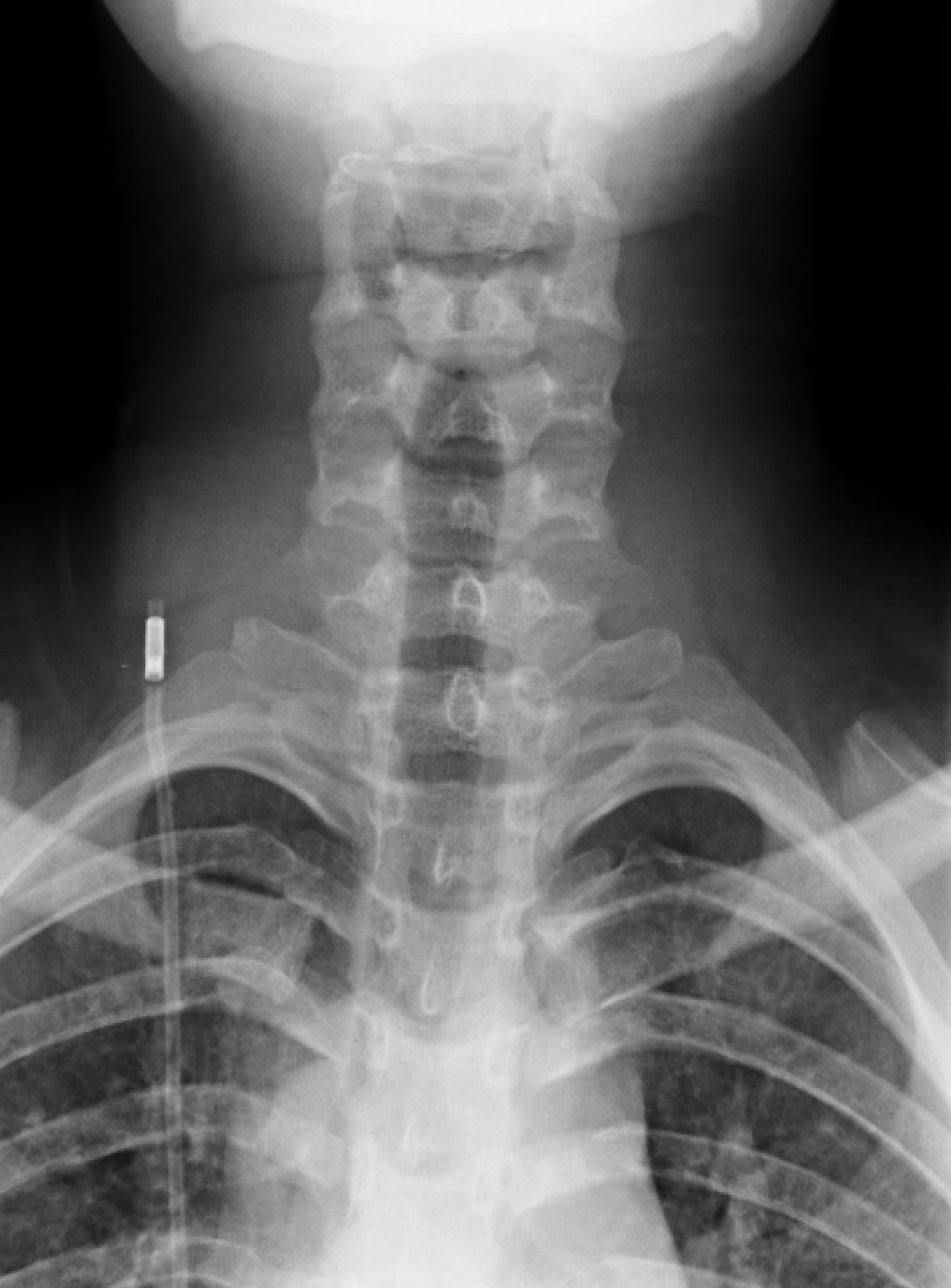 This is a rare complication of VP shunts and is usually a late complication occurring years after initial placement. A pseudocysts is a fluid-filled sac that collects at the distal tip of the catheter.  It is thought that they form because of inflammation or due to abdominal adhesions.  It can present with abdominal pain or distention with, or without, a palpable abdominal mass.  Neurological symptoms occur when there is elevated ICP.

It is possible that a VP shunt can over-drain as well and ‘under-drain’.  With rapid over-drainage, the dura can be stressed and subdural haematomas and/or extra-axial fluid collections can form.

A slit ventricular syndrome occurs when gravitational forces exert a siphoning effect on the ventricles.  This effect is generally amplified by pressure.

Children with a blocked shunt can present with a myriad of symptoms including:

Predictably, fever is commoner in children with shunt infections. Those with shunts because of myelomeningoceles may present with symptoms such as:-

Children present with these symptoms all the time to the ED. They are clearly not specific to a shunt problem.  As a consequence, diagnosing shunt malfunction on clinical grounds alone is incredibly difficult. Patients with shunt fracture or disconnection can present with a slow onset of symptoms.  They may have pain/tenderness localized to the area of fracture/disconnection or an area of calcification of an area of fluctuant swelling.

The diagnosis of a shunt malfunction requires a combination of CT, shunt series radiographs, and occasionally (though seldom in the ED), CSF sampling.

A CT is likely to show an increase in ventricular size and occasionally, periventricular lucency representing oedema.  There may be increasing ventricular size on cross-sectional imaging but up to 15% will have “such profound alterations on brain compliance that their ventricles will not enlarge in the face of shunt failure and increased ICP”.  Ventricular size doesn’t appear to reach a plateau until approximately 14months after placement of the shunt (regardless of type implanted).

A lumbar puncture (LP) may demonstrate increased opening pressures, but not always.  It is also used for evidence of infection.  This not performed commonly in the ED in the context of possible shunt malfunction.

Shunt series (SS) radiographs are used to check the overall course of the catheter, looking for disconnection or disruption.  The series will not show obstructions, only damage to the catheter. It can rarely demonstrate complications such as a CSF pseudocyst (abnormal separation of bowel loops near the catheter tip) but shouldn’t be relied upon for this.

The number of radiographs needed varies according to the size of the child.  It is usually 3-4 radiographs, including two views of the skull and the continuous trajectory of the shunt tubing down the neck, chest, and then looping into the abdomen.

If a series is performed after the scan, theoretically a 2 view skull radiographs can be eliminated, provided that the chest x-ray includes the base of the neck. Unnecessary radiation may then be avoided.

The use of ultrasound is an area of ongoing research and has been largely unvalidated in children with VP shunts.

No clear cause for Rhiannon’s symptoms was found following a thorough examination.  A CT was performed because of concern over shunt failure. Her ventricles were noted to be slightly larger than a CT performed previously.  Shunt series radiographs showed continuous, non-kinked tubing.  She was admitted under the care of the Neurosurgeons and her shunt was revised.  No physical reason for shunt obstruction was found.

Pople IK. Hydrocephalus and shunts: What the neurologist should know. Neurol Pract. 2002;73(1).