Home > View All > Spitting the dummy

A 4 month old male infant is brought to the emergency department by a fire and rescue squad after responding to a 911 call for respiratory distress. He was sucking on a pacifier when his caretakers noticed that he had sucked the pacifier into his mouth.

A home health nurse was present and unsuccessfully attempted to retrieve the pacifier using a blind finger sweep. 911 was called. At the scene, paramedics found the infant with a tracheostomy and a home ventilator (former 28 week twin with a stormy neonatal course). Ventilation through the tracheostomy was continued with a self-inflating bag.

His pertinent exam finding is a hard plastic object wedged into his oropharynx. His air exchange is satisfactory. Good color and perfusion. Direct visualization of the airway with a laryngoscope is attempted. The back side of a plastic pacifier is identified. It is firmly impacted into the child’s pharynx. Soft tissue radiographs of the airway are obtained. 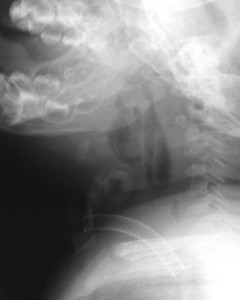 Are there any foreign bodies visible?

Is the epiglottis normal?

Is the trachea normal? 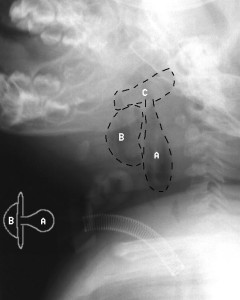 When confronted with an airway foreign body, it is important to know where it is located and how many objects might be involved. It is also helpful to see if any complications have occurred from the object (such as air leaks).

The infant was ventilated via his tracheostomy tube, and his oxygen saturation was maintained at 100%. He was awake but appeared to be hurting. An attempt was made to remove the object under direct visualization, but because the object was so large and firmly impacted, it could not be easily removed.

A pediatric surgeon was called. The infant was given lorazepam and vecuronium for sedation and muscle relaxation. The pacifier was removed in the emergency department.

Airway management is an essential skill in the emergency care of children. Many cardiopulmonary arrests in childhood are the result of a primary airway emergency. When confronted with a child who is in distress, rapid and efficient management of the airway is mandatory.

If the patient has a forceful cough or at least is ventilating sufficiently, a partial airway obstruction may be present and no further intervention should be done until the patient is in a place where more advanced airway control can be performed.

When faced with a patient who cannot be ventilated by rescue breathing or mask ventilation, an obstructed airway must be considered. If the patient demonstrates the signs of a completely obstructed airway (cyanosis, loss of consciousness, ineffective cough, and inadequate ventilation), then steps must be taken to provide an airway immediately.

Blind finger sweeps once taught for situations where the child could not be ventilated are now considered to be dangerous. Sweeping the oropharynx for foreign objects may result in pushing the object further into the airway and worsening the severity of the obstruction. If the rescuer can visualize the foreign object in the oropharynx, he/she may then attempt to retrieve it. If no object is seen and the child cannot be ventilated after multiple attempts to dislodge the foreign object, then a surgical airway should be attempted.

A 3 ml syringe can be cut so that the ventilating bag ETT connector will fit snugly over the barrel of the syringe and the syringe tip can be inserted into the hub of the needle. A 3.0 or 3.5 endotracheal tube connector can also be used to fit the small end into the catheter’s hub and the large end onto the ventilation bag. Ventilating through a small catheter results in substantial flow resistance and inadequate ventilation. If a larger airway cannot be secured expeditiously, it may be preferable to use a transtracheal ventilation setup using the oxygen wall outlet pressure to force more oxygen through the transtracheal catheter.

Although many recommendations for transtracheal ventilation have appeared in the literature, two suggestions are diagrammed here. 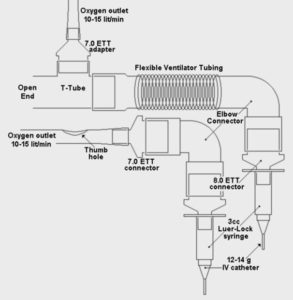 Both devices show the oxygen wall outlet (at 10 to 15 liters per minute) connected to the transtracheal catheter by tubing of various types. In the line of airflow, there is an opening. By occluding this opening with your thumb or the palm of your hand, the oxygen flow will be forced through the transtracheal catheter. Although this may sound excessive, the actual flow through the small gauge catheter is still barely enough to deliver an adequate tidal volume. Prove this to yourself by placing a glove or balloon over the end of the catheter to see how much oxygen is actually delivered through the catheter. It is vital to have such a device pre-assembled for emergency use. In the event of an emergency, there will not be enough time to assemble it then.

Exhalation generally occurs passively through the glottis (not through the transtracheal catheter), thus hyperexpansion is usually not a problem unless there is bi-directional airway obstruction. In the case of a foreign object impacted into the airway causing bi-directional airway obstruction, needle cricothyrotomy will not succeed due to excessive air trapping. Needle cricothyrotomy and transtracheal ventilation are highly complication prone. For optimal success, team practice sessions can avoid mistakes. One member of the team must dedicate him/herself to holding the transtracheal catheter in place.

If this catheter is ever released for a seemingly more important task, the catheter will kink or dislodge. This is a fatal pitfall that must be avoided. Quick airway kits are now available for use. The larger airways provided in these kits are more optimal than a transtracheal catheter. However, experience and familiarity with these kits are essential for success. Decide which emergency airway method you prefer and practice it well to be prepared for such an emergency.

Never utilize cautery techniques in such an emergency since it is highly likely that high concentrations of oxygen will be present around the airway and neck. Any sparks or burns may result in spontaneous combustion manifesting as fire or an explosion. The nursing staff should be taught to never allow surgical cautery in this situation.

In the case of this infant, we are not told whether the home health nurse could see the foreign object, but if she could not, the blind finger sweep would not have been appropriate. Also, remember that this child had a tracheostomy and was ventilating adequately, so no attempts for removal of the object should have been made prior to arrival at the emergency department. It is possible that if the blind finger sweep was not done, the foreign object could have been removed more easily.

When confronted with the possibility of an obstructed airway, utilize the chin lift-head tilt or jaw thrust first. Next, attempt to ventilate. If necessary, proceed to chest thrusts/back blows (infants) or abdominal thrusts/back blows (children). When these efforts fail, an advanced airway technique is indicated. Blind finger sweeps are not recommended.