Home > View All > How can we rule out epiglottitis?

How can we rule out epiglottitis?

Loren Yamamoto . How can we rule out epiglottitis?, Don't Forget the Bubbles, 2014. Available at: https://dontforgetthebubbles.com/rule-out-epiglottitis/

A 2 year old boy is brought to the emergency department at 2:30 a.m. complaining of throat pain, not drinking, drooling, difficulty swallowing, coughing, nasal congestion, and fever.

The throat pain, difficulty drinking, and drooling started in the afternoon and have worsened over the night. He has had the coughing and nasal congestion for 3 days now. He was given some oral paracetamol 45 minutes ago, but he could not swallow it. His past history is significant for frequent ear infections.

His immunizations are “up to date”.

At triage, the nurse notes that he is tired in appearance, but alert. He is given 14 mg/kg of paracetamol rectally.

T38.6 (rectal), P143, R28, BP not taken, oxygen saturation 100% in room air. He is active and alert. Not toxic. Not irritable. Drooling is noted but he is not tripodding. Eyes clear. TM’s normal. Nose with thick mucus. Throat is not examined.

Neck supple, small nodes. Heart regular without murmurs. Lungs clear. No stridor. Good aeration. No retractions. He coughs occasionally and the sound of the cough is not croupy. Abdomen benign.

Color and perfusion are good. Although he does not look toxic and his airway function is assessed as being good, a lateral neck radiograph is ordered at 3:00 a.m. to look for a retropharyngeal abscess or epiglottitis. 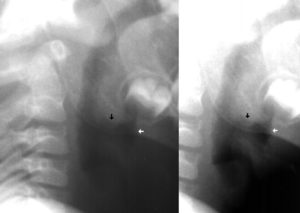 The original radiograph displayed here was excessively dark. It was read with the assistance of a hot light. This scanned image shown here shows the radiograph scanned using standard light intensities and another view scanned using a hot light. Thus the image on the right shows the soft tissue structures better while overexposing the bony structures.

The pre-vertebral soft tissue space is not widened. This essentially rules out a significant retropharyngeal abscess.

The positioning of the patient does not show his neck well extended. It was felt that this patient probably did not have epiglottitis, but the radiograph was suspicious enough to worry the physician. A tongue depressor was used to visualize the epiglottis, but it still could not be seen. He was sent back to the imaging department to repeat his lateral neck radiograph with better positioning. 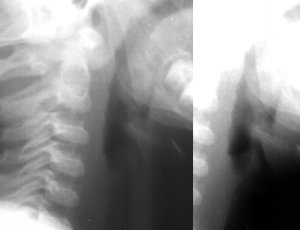 This radiograph was again somewhat dark. The epiglottis still appeared to be enlarged (thumb-like) and the pre-epiglottic space was still shallow. At 3:30, it was decided to get a radiologist’s consultation by teleradiology.

The patient was given IM ceftriaxone while waiting for the radiologist’s call. The radiologist reviewed both radiographs and agreed that they appeared to show epiglottitis.

At 4:30 a.m., an ENT surgeon was called. He felt that it was satisfactory to hospitalize the child in a floor bed for observation. He did not feel that intubation was indicated, nor admission to a more advanced or intensive care unit for observation.

Over the next few hours, the patient did not worsen. The ENT surgeon reviewed the radiographs and agreed that the epiglottis appeared to be enlarged. Fiberoptic laryngoscopy carried out later that morning showed 3+ adenoid hypertrophy, mucopurulent discharge, a non-enlarged epiglottis, 3+ edema of the vocal cords, and a clear subglottic region. A second radiologist who looked at the radiographs felt that both radiographs showed a normal epiglottis. The epiglottis can appear to be rounded if the lateral neck is taken at an oblique angle.