Home > View All > Just another bronchiolitis?

A 7 week old term female infant presents in winter with wheezing, coughing, and two episodes of non-bilious emesis. She was seen by her pediatrician, who suspected that she had bronchiolitis, and she was treated with oral albuterol syrup. An RSV (Respiratory Syncytial Virus) nasal prep was done, and this was negative; however, the patient’s condition worsened, and she was brought to the Emergency Department later that evening.

The infant was fussy, though consolable, with moderate respiratory distress. She was non-toxic in appearance.

The anterior fontanelle was soft and flat. The pupils were equal and reactive and the mucus membranes were moist. The neck was supple. The lungs had diffuse wheezes and crackles bilaterally with intercostal retractions. Heart sounds were difficult to auscultate due to the noisy breathing, but no obvious loud pathologic murmur was heard.

The abdomen was soft and non-tender with active bowel sounds. The liver edge was palpated 3-4 cm below the right costal margin. Capillary refill time in the extremities was 3 seconds.

The patient was placed on supplemental oxygen and a CXR was obtained. 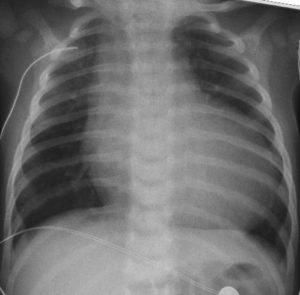 An EKG was done. 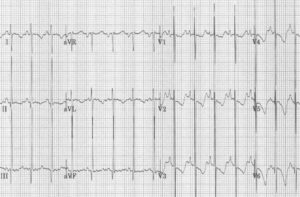 It is not easy to see the tracing of some of the precordial leads because they are very large.

The axis of QRS is 90 degrees (roughly isoelectric in I and positive in AVF). This is a rightward axis. The large QRS’s in V1-V6 meet voltage criteria for both LVH and RVH. This EKG shows biventricular hypertrophy.

The patient was treated with furosemide, 1 mg/kg IV, and dobutamine 5 mcg/kg/min as a continuous infusion, with marked improvement in respiratory status. The infant was admitted to the Pediatric Intensive Care Unit, and a cardiology consultation was obtained.

An echocardiogram showed severe coarctation of the aorta, with a tight posterior shelf distal to the left subclavian artery. The left ventricle was dilated with markedly decreased function. The patient subsequently underwent operative repair of the coarctation, with an uneventful postoperative course.