Home > View All > Early Budesonide for the Prevention of Bronchopulmonary Dysplasia

Early Budesonide for the Prevention of Bronchopulmonary Dysplasia

Bronchopulmonary dysplasia (BPD) is a common outcome in premature neonates, from 85% in 22/40 infants, to about 33% of neonates born in the 27th week of gestation. This recent study, published in the NEJM trialled a potential new therapy to reduce BPD.

Embryonic stage occurs from 26 days to 6 weeks gestation, in which the three major divisions of the lungs occurs as an out-pouching from the foregut endoderm. This forms the lungs, lobes and segments.

Pseudoglandular stage occurs from 6 to 16 weeks gestation, and there are a further 14 divisions of the bronchioles.

Canalicular stage is from 16 to 28 weeks gestation, and is a time of accelerated terminal lung maturation. There is the appearance of specialised lung cells including precursor alveoli. In this phase, each terminal bronchial divides into two respiratory bronchioles and the respiratory vasculature further develops.

Saccular stage, from 28 to 36 weeks gestation. There is subdivision into terminal sacs and primitive alveoli. Alveoli continue to develop into the alveolar stage (from 36/40 and into early childhood.)

So, what is bronchopulmonary dysplasia?

It was first classified by Northway in 1967, on the basis of the clinical, radiologic, and histologic progress of evolving chronic lung disease in premature neonates. His original classification, based on a series of infants in Palo Alto, described four stages of disease:

Initially there is an acute respiratory distress syndrome for 0-3 days, followed by regeneration (4-10 days), then transition (10-20 days), and finally a chronic picture thereafter.

As with many clinicopathologic entities, the nuances are more complex than first thought, and BPD is generally held to be attributable to a combination of gestation, inflammation and genetic factors. Hence, Jobe defined the “new BPD” in 1999 and the criteria has subsequently matured thus:

An infant at 36/40 corrected gestational age, either:

Systemic steroids for BPD is used relatively frequently, but remains controversial, with a number of protocols suggested, as well as the inherent risks of systemic steroids (adrenal suppression, immunosuppression et cetera). One postulate is that inhaled steroids would reduce these risks.

In this trial, (P) 853 premature neonates, born 23+0 to 27+6 weeks gestation, were randomised to receive either (I) early inhaled budesonide 200mcg or (C) placebo, to assess for (O) survival with bronchopulmonary dysplasia or death.

There was also an analysis of secondary outcomes, which I’ll mention later.

How did the trial work in practice?

Soon after birth, there was consent and recruitment, with randomisation being double-blinded and block-stratified.

Patients were given two 200 mcg actuations of budesonide or placebo via MDI.

The first dose was within 12 hours of birth then:

Dosed every 12 hours for 14 days, then daily until either not requiring oxygen/positive pressure ventilation or at 32 weeks corrected (whichever occurred first).
For those infants on ventilators, the MDI was administered via an in-line spacer, and for the remainder, via a face mask as per traditional salbutamol therapy for asthma. 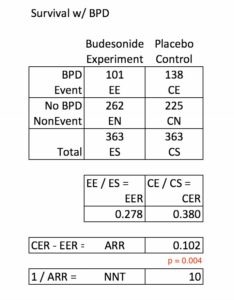 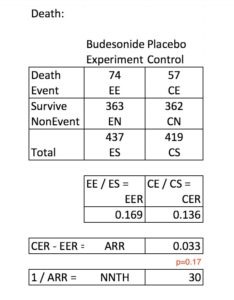 Firstly, it’s important to mention that the data collection phase was technically halted early, although this was actually after the last infant had completed their course of study drug/placebo. I’m not sure if this is because the Number Needed to Harm data was analysed first, but there seems to be a contradiction in terms of looking at the final numbers. That is, there was a statistically significant reduction in BPD, and a non-significant increase in death. It may be that the stopping boundary was reached mid-trial, but not borne out in the overall analysis.

With regard to the primary outcomes, it’s hard to comment on the significance, if any, of the mortality rate. It would seem more expected for mortality to reduce with reduced BPD, and the authors’ discussion seems to suggest a bit of surprise in the results. I think the trial has certainly made a strong case for clinical equipoise and a rationale for further investigation.

Although the study is primarily powered to investigate BPD and death, a number of secondary outcomes were reported, including a clutch of the standard neonatal pathologies such as retinopathy of prematurity, brain injury, necrotising enterocolitis/intestinal perforation, culture (proven infection). Of note, there was a statistically significant reduction in the number of PDAs requiring surgical ligation. The authors report a relative risk of 0.55 with a P value of 0.004. None of the other results reached significance, and I’m not really sure what to make of the significance of the above metric, given that over twenty secondary outcomes were measured.

Usual care is nicely described, as are some of the challenges in any neonatal trial, with temporary stops in 15-19%, systemic steroids, diuretics (more in placebo group) accounted for and similar between arms.

I think that there’s surprisingly low recruitment for the trial, in that of 1767 eligible infants more than a quarter of parents did not provide consent. Whilst I respect that 420 were not approached at all, I’m not sure what this says about either the intervention, the communication, or the attitude regarding trials in neonates.

The entire study protocol and supplementary data is all available via the NEJM website, which is to be applauded. Is this just lucky or should we read more into this?

This study appears to show some promising results; that early inhaled budesonide might have an NNT of 10 for bronchopulmonary dysplasia. The key will be in the neurodevelopment outcome data as that is the holy grail in this gestation. The NEUROSIS group protocol is designed to collect this data long term, and we should expect a further paper in the future. My impression is that the second part of this trial is more likely to change practice if the subsequent results are promising.