Every now and then an article comes along that reminds me that some of the old wives tales are true. This is one of them…

My mother (not really an old wife) always used to tell me to put nothing in my ears that was smaller than my elbow. If you read this trawl of the National Electronic Injury Surveillance System you will see why…

Over a twenty year period (1990 to 2010) they found over a quarter of a million (!) cotton-tip applicator (CTA) visits. This amounted to 17.6 injuries per 100,000 children. What is fascinating to me is that the greatest number of these (40.2%) took place in children under 3 years of age. My children are very curious but it would seem that a parent’s quest for clean ears might be more to blame. 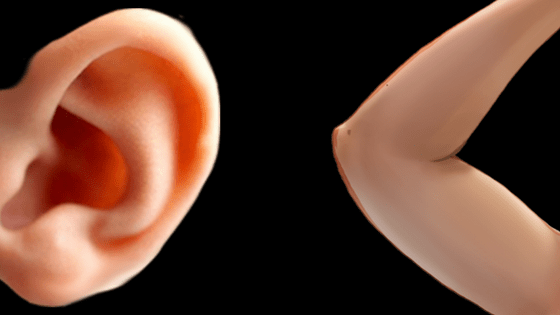 Cerumen, or earwax, is made from desquamated cells from the stratum corneum of both the deep and superficial auditory canal. These old corneocytes then mix with glandular secretions from sebaceous and cerumenous glands to form earwax. The two different phenotypes of wax – wet and dry – have differing levels of squalene and cholesterol. The wet stuff is dark brown and sticky and contains about 50% lipid. Dry cerumen is a flaky and beige only contains about 20%. A single gene on chromosome 16 seems to encode for the type of wax produced.

So what is the point of ear wax? Other than removal of flaking cells it acts to clean and lubricate the external auditory canal. There is little evidence that it is part of the host’s immune defence system. Given that the tiny little hairs in the outer third waft cerumen crumbs out it is a wonder that we need cotton buds.

Leo Gerstenzang, founder of Baby Gays (which were renamed as Q-tips© in 1926) is cited as the first to come up with the idea. The apocryphal tale is that he saw his wife wrapping wads of cotton around the end of a tooth pick and had a light-bulb moment. In case you are wondering, the Q stands for ‘Quality’.

The study data that we are looking at showed that the main problems caused were retained foreign body, tympanic membrane (TM) perforation and soft tissue injuries. Whilst older children were more likely to get a bit off cotton top stuck in their ears, the younger ones tended to present with a TM perforation. If you want to become an expert at removing foreign bodies from ears, and other places where children like to stick them, then head over to the Pediatric Emergency Medicine Playbook.

Parents might think putting a cotton bud in the ear is unlikely to cause harm but a number of serious consequences have been reported including ossicular disruption, hearing loss or the development of a perilymphatic fistula

Ossicular disruption – poking too hard can dislocate those tiniest of bones
Perilymphatic fistula – a hole in the round window causes a leak in fluid between the inner and middle ear leading to dizziness, hearing loss and ataxia

Cotton tip applicators should only be used for art and craft projects. The bottom line is, the old wives were right – nothing bigger than your elbow. And next time you are in Japan, don’t go to a mimikaki salon  (thanks, Petria, for the link).

earwaxTraumatic Injuries of the Ear and Temporal Bone