Through the looking glass

As we head out winter in the southern hemisphere the northern hemisphere can see that ‘Winter is Coming’ and with it the scourge of the paediatric emergency departments – bronchiolitis.  It’s one of those diseases that the we should all be able to spot but the real challenge is picking up those that present as if they have bronchiolitis but in fact have a different disease entity altogether.

Tonight I had the privilege to talk to the team at the Werribee branch of Ambulance Victoria. I was given the brief to talk on something to do with paediatric respiratory problems and I thought I would focus on one of their most common presentations – asthma.

Henry Goldstein wrote an excellent article on pertussis a few years ago.  With some interesting new data coming to press with regard to risk factors for complications of the disease we thought it might be worthwhile doing some spaced repetition.

“My childhood was full of deep sorrow – colic, whooping cough, dread of ghosts, hell, Satan, and a deity in the sky who was angry when I ate too much plum cake” – George Eliot

Although cases have been described as far back as the Middle Ages it wasn’t until 1906 when the organism, Bordetella pertussis, was isolated by Bordet and Gengou. Up to 16 million cases develop worldwide every year with the majority of cases being in the developing world. Australia reported around 10,000 cases in 2009. Data from 2013 suggests it caused at least 61,000 death worldwide though this is likely to be a gross underestimate. Pertussis is one of the leading causes of vaccine preventable deaths worldwide.

B. pertussis is highly infectious with the majority of exposed household contacts becoming infected to various degrees. The incubation period is usually quoted as 4-21 days with the average being 7-10 days.

Before the harsh coughing begins there is often a couple of weeks of symptoms that could easily be mistaken for a viral upper respiratory tract infection. Children may have a runny nose and a very mild tickly cough. This is the catarrhal phase. The classic ‘whoop’ might not be hard until week three or four of the illness.

The classical presentation is of a patient that has paroxysms of coughing that terminates in an audible inspiratory ‘whoop’. Like most classical presentations we learn about in medicine this presentation is rarer than we think. Children may also present with a protracted cough, or forceful post-tussive vomiting. Parents often seek advice as their children have had a couple of courses of antibiotics with no improvement in cough. It’s not know as the ‘one hundred day cough’ for nothing.

People with pertussis (adults and children alike) are infectious from the beginning of the catarrhal stage through to the third week after the onset of the paroxysmal stage of coughing. They cease being infectious five days after a course of antibiotics.

Other than a suspicious clinical picture, formal diagnosis is best made by performing PCR for Bordetella on a nasopharyngeal swab. Once the initial three weeks have past though, it becomes increasing difficult to culture and it may be necessary to use rising IgA titres to make the diagnosis though this does not affect management.

A number of treatments have been posited including vitamin C injections.

Coughs last, on average, 16 days. A Cochrane review found no specific benefit of steroids, bronchodilators or immunoglobulins for the treatment of the cough. Over the counter remedies are unlikely to help and may potentially cause harm.  To hear more listen to this great rant from Dr Anthony Crocco. The only thing that may help (a little) is honey.  Take a listen to Ken Milne’s podcast SGEM #26 – Honey, Honey for more on this subject.

What about antibiotics? Well (in adults) they are recommended in the initial catarrhal phase to help reduce duration of infectivity but they don’t seem to have much effect after the disease has been hanging around for three weeks. Because of this they are not recommended beyond this time period.

If they are needed then macrolides such as erythromycin, azithromycin or clarithromycin are recommended. Azithromycin should be used in children less than one month of age as erythromycin use has been linked to an increased incidence of hypertrophic pyloric stenosis.

Pertussis is far from benign in unvaccinated infants. According to the CDC, in children under 1 that are not fully vaccinated:-

In Winter’s retrospective analysis of US pertussis deaths in infants under 120 days old mortality was linked with:

In those less severely affected it may still cause sub-conjuctival haemorrhages, rib fractures and loss of bladder control.

So who should get antibiotics if exposed to a confirmed case of pertussis? Most guidelines recommend that the following groups of people receive antibiotic prophylaxis.  It’s not really to treat the illness but rather to halt the spread.

To be fully vaccinated the child must have three effective doses of pertussis vaccine given at least four weeks apart.

Whilst childhood immunisation does prevent the majority of cases, individual immunity does appear to decrease with time so there has been an upswing in the number of older children and teenagers affected. Pertussis is a notifiable disease and over 70% of cases that are notified are in patients over the age of 15.

The current Australian immunisation schedule has pertussis vaccine being given as a part of the combined Diptheria, Tetanus, acellular Pertussis (DTaP) vaccine at two, four and six months of age. Other countries may have an alternative schedule. The child then receives a pre-school booster at 4 years old. Because of the waning immunity they should also receive a dose in their teenage years. An individual’s immunity to pertussis may well have disappeared by the time they reach adulthood so new parents, or grandparents living in a house with a newborn should be offered a booster.

We have teamed up with APLS to share the videos from their Paediatric Acute Care Conferences. These videos have never been open access before, so if you weren’t able to attend the conferences, then now’s your chance to catch up.

The PAC Conference is run each year by APLS and consists of presentations on a range of topics relevant to paediatric acute and critical care.

Early Budesonide for the Prevention of Bronchopulmonary Dysplasia

Bronchopulmonary dysplasia (BPD) is a common outcome in premature neonates, from 85% in 22/40 infants, to about 33% of neonates born in the 27th week of gestation. This recent study, published in the NEJM trialled a potential new therapy to reduce BPD.

DFTB in EMA #3 – Easing the Wheeze

The team at DFTB had our third article published in the series for Emergency Medicine Australasia Journal.

Wheezing children commonly present to the ED. Bronchiolitis, preschool wheeze and asthma are common causes of such presentations. It is important to note that the term ‘wheeze’ is frequently misused by parents to describe a number of respiratory noises, including transmitted upper airway sounds and stridor.[1] Wheeze is, in itself, a symptom manifested by ‘a continuous whistling sound during breathing that suggests narrowing or obstruction in some part of the respiratory airways’.[2] One British study reported that 29.3% of children have had a wheeze by the age of three, and 30% of preschoolers with recurrent wheeze are diagnosed with asthma by 6 years of age.[3, 4] This article briefly reviews the diagnosis and management of preschool wheeze, while considering recent guidelines on bronchiolitis and asthma.

Click here to read the full article – “Easing the wheeze.”

From Cradle to the Grave – ACEM Annual Scientific Meeting 2014

This years Australasian College of Emergency Medicine Annual scientific meeting in Melbourne has attracted over 900 delegates from all over the world. With an overarching theme of “Back to the Future” a number of speakers have been looking back on the past year in emergency medicine literature and predicting what might be up and coming in the next five years.  Whilst there have been a number of wonderful speakers talking about all aspects of emergency medicine the second day had a number of sessions that would be of interest to those practicing paediatric emergency medicine as well as those clinicians working in mixed adult and paediatric departments.  Some of the talks have been recorded and will be available on the ACEM website in due course, but one of the talks, by Simon Craig of Monash Medical Centre, stood out.

The idea: Sitting erect vs slouching or slumping improves airflow in moderate-severe exacerbations of asthma

A pale, breathless 7-year-old with a known history of asthma presents to your department. Oxygen saturations are hovering in the mid-’80s with marked tracheal tug, subcostal, substernal, intercostal and supraclavicular recessions in addition to accessory muscle usage. He’s moving air and there’s a widespread wheeze throughout the chest. This child has a moderate-severe exacerbation of asthma.

In addition to commencing standard management including O2, salbutamol, steroids, IV access for a VBG (and considering some MgSO4), you notice that he’s sliding down the bed and curling into a ball.

The Therapeutic Guidelines for Asthma Management recommend nursing the patient sitting upright, but this can be quite challenging, especially if the child keeps sliding down the bed.

Anecdotally, I’ve seen more than a dozen children in this setting whose SpO2 has improved in less than a minute after adequate re-positioning, in adjunct to standard management.

To ameliorate some of these challenges, it’s my practice to prop children in order to remain sitting upright. I was first taught some of these tips by Dr. Tom Hurley, Paediatrician on Queensland’s Sunshine Coast, and added a few of my own. I’ll describe my method for positioning a child upright (and getting them to stay there!) in the context of an exacerbation of asthma. 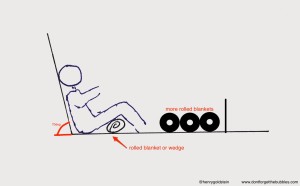 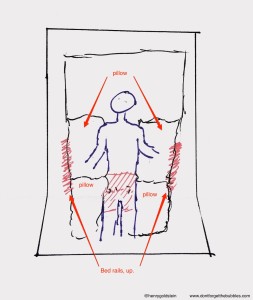 Although I’m a bit uncertain on the science behind all this benefit, we’re taught in medical school about “tripoding”;  most of us are familiar with the ‘tripod prayer’ seen in adults with exacerbations of COPD. It’s just a theory, but I suspect that once in bed, children don’t adequately tripod.

Firstly, they just don’t know how to position themselves, either because breathlessness is a new sensation or they’re too young. Secondly, kids simply don’t have the levers to adequately tripod against their surroundings. Thirdly, once in a large hospital bed, the surroundings are soft and squishy, reducing the efficacy of uncoordinated tripoding. Fourthly, the improved PEFR in the erect vs supine position is well demonstrated in a number of experiments done in the 1960s and 1980s (see references). Lastly, the V/Q mismatch that occurs in asthma might further benefit from an upright position.

In the spirit of #FOAMPed, I thought I’d float this out there and see if anyone has other methods of optimizing positioning for these patients.

Jamie is a 4 year old with ongoing pyrexia for a couple of weeks.  He has a mild cough but nothing else.  The family mention in passing that grandad recently had TB.

Is this common in the developed world?  How would you recognise it and treat it?

END_OF_DOCUMENT_TOKEN_TO_BE_REPLACED

In spite of your best medical management, the 9-year-old boy with severe asthma that you have been medically managing continues to deteriorate.  People are starting to mention ventilation.  Is doesn’t seem like a great idea…

Any doctor or nurse working a hospital should be familiar with mechanisms for delivering low flow oxygen. So you should know all the answers to this quick quiz…shouldn’t you?

END_OF_DOCUMENT_TOKEN_TO_BE_REPLACED

A 9 year old boy is rushed into ED with what is clearly a severe exacerbation of his asthma. His sats are 80%, his RR is 60-70 and he is not looking great. You can hear some air entry with a bit of wheeze. He clearly needs some good treatment and he needs it quickly. Which drugs you choose?