I’ve been lucky enough to be one of the few paediatric registrars allocated to an Adolescent Inpatient Mental Health ward for a 6 month rotation. Although I’d worked in (adult) Psych wards before, I had few well formed ideas about psychiatric theory or practice past how to “do a takedown”. In Shem’s House of God, the future psychiatrist repeatedly states that “Good medicine as doing as much nothing as possible”; and until this term, I wasn’t entirely sure what that was, and less about to expect when it came to the care of young people.

As this opportunity is becoming rarer by the year and the rarefied air of Inpatient Adolescent Psychiatry is far removed from most Paediatric practice; this series aims to help understand the work (and underpinning theories) seen on the inpatient unit, in four parts.

What is it all about?

Medicine is generally about defining a pathophysiological entity and having it go away, either actively or passively, in this regard, psychiatry is similar. And as much as it would be impossible to describe all of surgery, so it is with this series; hence this post considers just a few of the key underpinning ideas and theories of child and adolescent psychiatry.

Rather than presenting with epistaxis, arthritis or dyspnoea, patients present to psychiatry with their own set of symptoms and maladaptive coping strategies.

If we’re honest, the idea of “treating” psychotic, hungry, anxious, suicidal and lonely kids remains unpalatable to most clinicians, let alone wading into toxic family systems with the goal of “fixing” everyone, by “having a chat*”. This is not what we do.

But I’m getting ahead of myself.

In mental health, we don’t see young people as individuals, rather as a representative within a family system. This idea underpins the paediatric mental health model of care; that the young person in our care is the index or named patient, and they are part of a larger their family system.

The approach then, is about understanding the child, the family, how they function both on a “day to day” basis, and under stress, from a biological, social and psychological perspective.

Truthfully, a well functioning family system can hold a huge amount of distress in the community setting. These families spend many hour with our Community colleagues, School Guidance officers and therapists. It is when this system is put under further stress and strain that the young person ends up on the locked mental health ward.

In short, they are stuck. An inpatient mental health admission is, I suspect, rarer than major surgery in childhood, so you have to be pretty stuck to get admitted. And this is what we do: we seek to understand why a young person is stuck – their predicament – by asking three fundamental questions:

These questions allow both a Diagnosis and a Formulation for the young person’s presentation.

Appreciating the difference between these two is essential to understanding the role of Psychiatry. A Diagnosis describes a constellation of symptoms and coping mechanisms. It facilitates comparisons and ultimately permits the use of evidence-based-medicine, therapies and science. It provides a label. Diagnosis is why everyone with this label is the same. Formulation is the opposite. It focuses on narrative, influences, attachment and coping styles and the dynamics of a situation. In short, Formulation is why this person is different.

How do you even talk to teenagers? What do you ask them?

My peers asked me this on numerous occasions throughout the term, and I’d defer heavily to the benefits of the environment. Young people presenting with full-blown mania or untreated psychosis are almost always keen to talk.

Equally, by the time young people make it to the ward, there’s usually been some time between the awfully risky, intense, angry situation that has seen them arrive via Emergency.

On the ward, we sit in a quiet room with small unobtrusive windows and give the young person our undivided attention. This layer of environmental influence cannot be underestimated. Most young people are keen to talk by the time they meet the inpatient Psych team; they see them as the gatekeepers! That said, the role of the clinician is to help, remain nonjudgemental, understand, facilitate, support, challenge the young person.

Another frequent observation is that “it must be awful to see and hear all of that”, mainly, I suspect because as doctors we are better programmed to cope with lacerations of the flesh than of the mind. One part of understanding this, that is also a component of the therapeutic relationship, is the “Dynamic theory” (to which I will profess general ignorance past this brief explainer). 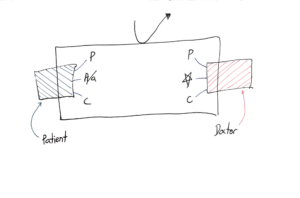 Essentially, the interview is treated like an operating room.

Every interaction arouses thoughts and feelings that remind you of your real (outside the room) life. The challenge here is to work out what is your ‘stuff’, and what is the patient’s ‘stuff’.

The additional layer to understanding this is that even when people talk, they can bring forward any number of ‘voices’. By this I mean that we all have an inner child (c) and an inner parent (P). The goal of the interview is to talk to the Adult/adolescent (A/a) as the clinician (*). You need to quiet your inner parent, and take the position of being bigger, wiser, strong and kind.

The key, of course, is not to ignore the patient’s ‘inner child’ or ‘inner parent’, because the presence of those ‘voices’ in the room is exquisitely powerful. The metacommunication allows you to feel the golden egg/sacred cow/holy grail of Mental Health, counter-transference.

That is, patients will arouse in you feelings. When you talk to people, you feel sad or angry or aggressive or hopeless or miserable or agitated or confused. This is counter-transference – the unconsciously activated reactions to the client – which may often simply mirror that of the patient. By seeking to understand these feelings, you begin to understand what it is to “be” the patient, and therein lies a key route to understanding the child’s predicament. I’ve heard it described that the best way to “see” these feelings is as if you are a third person watching the interview. At least that’s the theory.

Of note, understanding a patient’s words and feelings as they occur both in the interview and afterwards leads to an interesting paradox; if (in this setting) you feel the urge to act, first take no action and secondly consider Why is it that I feel like I need to act?

No post on psychiatry would be complete without at least one mention of Sigmund Freud, the Ego, SuperEgo and Id. The concept is, of course, generally relevant to understanding psychiatry, but more specifically and pragmatically helpful in understanding the Ego Defenses. These were first described by Anna Freud, and are part of a personality irrespective of mental health or unhealth.

Although an extensive explanation about the individual styles of personality defence are beyond the scope of this post, their particular characteristics are that they usually operate unconsciously (outside of awareness), that they operate to protect self-esteem by keeping unacceptable thoughts, impulses and wishes out of awareness, that they function to protect the person from experiencing excessive anxiety, they are part of normal personality functioning, they can lead to pathology if one or more is used excessively and that they are distinguishable from one another. Examples include projection, passive aggression, reaction formation, dissociation among others.

The key message here is to consider how a particular defensive style might deal with a difficult day, and an impossible day, and how these coping strategies can make things better or worse for the young person.

Further, the relationship between reality testing and personality defenses is important. Essentially, psychosis is impaired reality testing, and depending on a person’s ego defences, this reality testing can become more or less vulnerable to compromise. Often, rather than a sudden, abrupt impairment of reality testing, this decline may occur more gradually as psychotic thought processes emerge then supervene those grounded in reality.

The theories and philosophies I encountered in my time in adolescent psychiatry were also based on some of the work by three prominent psychoanalysts, John Bowlby (Attachment Theory), Donald Winnicott (being a “good enough” parent and the Transitional object) and Melanie Klein (understanding what “Borderline” means). Rather than oversimplify and undersell their work, I’ll let The School of Life explain in three short (and fascinating!) videos.

*In Psychiatry, there is no such thing as “a chat”. A good psychiatric interview might feel – for the patient – like “a chat”, but any interaction where the doctor-patient relationship is in place remains clinical. The clinician remains alert and mindful of their words and can either in situ or retrospectively make an assessment of the patient’s mental state; hence the interaction, irrespective of perceived formality, is essentially a psychiatric interview.

Many thanks for the guidance and mentorship of Dr Jannie Geertsema, Child & Adolescent Psychiatrist in this series.