With 130 teams entering Don’t Forget The Brain Busters, and 50 teams making it through the kids’ round, the toughest round with the toughest critics, we have been bowled over by the incredible answers sent through. We’re delighted to announce the final leader board. 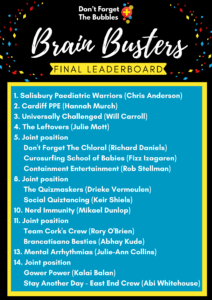 The top four teams have made it through to the live final: The Salisbury Paediatric Warriors, Cardiff PPE, Universally Challenged and The Leftovers. The competition was fierce.

The four teams will be fighting for the title of DFTB 2020 Brain Busters champion and a special, limited edition DFTB Brain Busters t-shirt.

Tune in to cheer the teams on – you will need to register in advance. You can do that by filling out the form at the bottom of this page, or here. 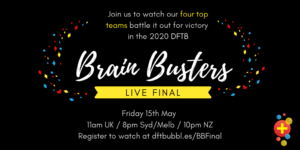 In case you missed them, here are our five qualifying rounds again, this time with answers.

Round 1: The neonatal crossword. Answers here

Round 3: The minor injuries picture round. Answers here

Round 4: The emoji round. Those long awaited answers here

The kids’ round answers

Our mini quiz masters are allowing us to share their marking criteria along with some of their favourite answers.

5 points: fire, grass, water (they are the starter pokemon)

4 points: normal (few weaknesses, has the most pokemon), fighting (most damage but can ricochet), steel (one of the strongest), poison (double the damage)

3 points: dragon (not that much damage but good attacks), ice (can freeze but no damage), psychic (make you confused), rock (some throw rocks)

1 point: bug, ghost, and fairy (these are all weak pokemon)

The kids loved the rationale behind some of your answers.

“I would be Luxray. The coolest looking of pokemon and has the medical superpower of X-Ray vision. This means children in A and E would have to wait much less time as I could just quickly cast my eyes on them, see what the problem is and make a plan for it to be fixed much sooner.” Universally Challenged (University Hospital North Madlands)

“I’d be a Chansey so I can continue working at the hospital and caring for sick children. Chanseys know a lot about medicine because they are used to work with nurse Joy. Plus they know the power “sleep” to help sedate the patient. Plus they are super cute.” Fri-Burgers

“Dr Anderson says: I would like to be Nurse Joy (because nurses are awesome and she heals other characters) but my children say that I am SNORLAX (because he likes sleeping and he is fat… apparently)” Salisbury Paediatric Warriors

If you were a teacher in Hogwarts, what subject would you teach and why? (Jude, age 8)

Like Kai, Jude was pretty specific about the points allocation for this question.

5 points: defence against the dark arts (you only last a year as a teacher but it can save your life), care of magical creatures (scary and fun), Quidditch (world class level)

3 points: charms and astronomy (useful but not fun)

“We would start a new subject called Pomfrey’s Emergency Wiziatrics. This is because young wizards and witches should learn essential first aid skills to deal with their…magical accidents! We would teach them to never forget to use distraction methods for little wizards, such as Pygmy Puffs (or other age-appropriate Weasly Wizard Wheezes products). We would also start an owl-line resource with information on how to provide muggle first aid, in case they need to do so, which of course would be called Don’t Forget The Muggles.” by Haris, age 36 on her approaching birthday, on behalf of Containment Entertainment

“We would be Defence Against the Dark Arts teacher because working in a hospital can be super scary, but we can defend against it really well (plus it’s cool so meet all the crazy monsters and cast spells!)” Myoclonic Jerks, Ireland

“I would be a potions professor, working alongside Madam Pomfrey on the Hospital Wing. I’d be famous from the numerous books I authored such as ” Otitis Media and the philosopher’s itch” “Erythema Neonaturum and other potions to combat spots” and my best work ” Levateracetam and other twitch stopping tinctures.” Universally Challenged (University Hospital North Madlands)

If you could choose a superpower, what would it be and why? (Katie, age 12)

The kids tell us that this was a tough one to score. They were looking for originality, adventure and something that would do good in the world, and of course, something that made them laugh. Here are some of their favourites.

“I can influence the weather by singing. In Belgium, it rains a lot and it can make people grumpy. But not anymore! Now there are only sunny days and happy people due to my cheerful songs.” The Quizmaskers

“Invisibility PPE so that we don’t scare all the children while we look after them in hospital.” Stay Another Day, East End Crew

“I would go back to the day the DFTB team made up the emoji round and tell them not to make it so hard!” Nerd Immunity

“To make people laugh when no one else can – because if you can make people see the funny side of things, you’re most of the way to making everything all right.” Laura, age 27, on behalf of The Tele(health)Tubbies

“I would like to be able to control the weather (Atmokinesis- a bit like Elsa from Frozen) although I would definitely choose sunshine for when I’m off work or on holidays to play outdoors and maybe snow at Christmas as you can’t beat a White Christmas 🙂 or if I choose to befriend a snowman hehe.” Mental Arrythmias

“If I could choose a Superpower I would like to have the superpower of Elsa from Frozen so that I can freeze naughty bugs that make children ill so that they can get better quickly. I could also create magical worlds out of snow and ice. Imagine a giant slippy “Ice slide” going from your house to your best friend’s house? Most importantly, I can fly!” Curosurfing School of Babies

“I’m a doctor, so I think the superpower I would choose would be one I get to use every day… I would love to have a superpower to fix broken bones. Then the children I see who’ve hurt themselves wouldn’t be in pain any more, and they’d be able to run, and jump on trampolines, and play on monkey bars again straight away!” The Smooth Obturators

Another question with some impressive answers and, so we’re told, a tough one to score. These are their top picks.

“We would use the time machine to travel forwards to the day of the DFTB Quiz Final. We would take part in an outwardly light-hearted and whimsical manner, and appear relaxed about our mediocre performance. In reality, however, we would be writing down everyone else’s answers with unwavering focus and a grim determination to win at all costs. We would then return in our time machine to the present day, emotionally numb but looking forward to certain victory and our share of the multimillion DFTB prize fund. Given more time, we would also try to do something about COVID and the JFK assassination, but we only have this time machine for one day, and presumably would need to work in comfort breaks.” Rob, age 36 and ½, on behalf of Containment Entertainment

“I would use the time machine to travel the past to find a couple of Unicorns and bring them back. I’m convinced that Unicorns really did exist in the past because if you look closely at the British Passport, it has a Unicorn on the front of it!” Curosurfing School of Babies

“The ability to teleport. It would mean I could go anywhere, whenever I wanted, even make Brisbane for DFTB20 ;-D” Clinicians Of Varying Intellectual Dispositions

“I would go back in time and show people what is going to happen to the earth we live on if they don’t look after the environment, and ask them to please please take care of the world, so that it can be here for my children and my children’s children to enjoy too.” The Smooth Obturators

“We’d go back in time to just before the chicken stepped out into the road and ask them, “why are you crossing the road?” and then we’d know the answer to the oldest question in the world.” Don’t Forget The Chloral

“Go forward to the day when Tottenham Hotspur win the premier league in 2090.” Tallafornia

Where do triceratops sit?

What did the finger say to the thumb?

I’m in glove with you.

Why didn’t Elsa see a doctor for her sore throat and cough?

Because the cold never bothered her anyway.

If you’re English in the lounge, German in the hallway, and Italian in the bedroom, what are you in the bathroom?

What did the magic tractor do?

It drove down the road and turned into a field!

Well, I’ve got this racing snail. It’s not been doing very well for the last couple of weeks. So I took its shell off to see if it would make it go faster.
If anything…….

It’s made it more sluggish!

Why don’t you give Elsa a balloon?
Because she would just let it go

What do you call a sleeping bull?
A Bulldozer

What do you call two octopuses that look the same?

What do you call a sick crocodile?

We were looking for an illigator, crock (or similar) or crocod-ill but we had to laugh when we saw these answers:

An ambulance (otherwise it would be a very illigator). The Salisbury Paediatric Warriors

Why did the chimney call for a doctor?

Common answers were the flue, she wanted to stop smoking and he was burning up. But these were our favourites:

Because it had a foreign body (Santa) stuck inside of it. Broken Pencils

He had a bad cough/has the flue from all his smoking (but also considered differential diagnosis of small brick carcinoma). Herd Immunity

What do you call a sick crocodile? A corona-dile?

Why did the chimney call for a doctor? Because the corona-dile was in it?

And our favourite team name?